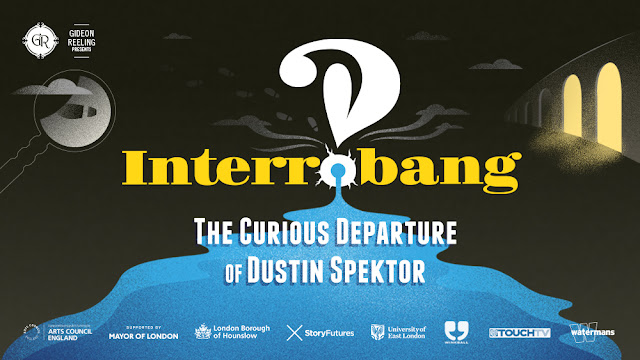 This Wednesday 20th October sees the launch of Interrobang?!, a genre-busting theatre-meets-online gaming experience that draws you into a real-time thriller, where you become the investigator in a shadowy murder case.

It’s a unique experience full of intriguing characters, interviews, challenges, moral quandaries and puzzles. It’s theatre away from the theatre, and gaming away from the console.

Players use QR code technology and a custom-made website to take a journey through multiple digital spaces. You’ll delve into a database of documents and video interviews, with original music and the odd surreal musical number.

And that’s just what you can play from home. Take your sleuthing outside in Interrobang?! Local, an immersive location-based audio experience that expands the Interrobang?! universe.

Set in the town of Brentford, decipher the locations of hidden messages to uncover the mystery of powerful forces shaping the very places we live. Look out for copies of The Echo newspaper at Watermans and other places around Brentford to begin your journey.

Hopefully what is written above has whetted your appetite!

You may be wondering what connection I have to this thrilling project.

Throughout my PhD at Royal Holloway, I’ve been a consultant for StoryFutures, an initiative that helps to create and fund R&D projects focused on immersive storytelling. Part of their remit is to connect academics with companies and organisations that can benefit from their expertise.

Back in March, StoryFutures approached me to say they’d had an enquiry from a company called Gideon Reeling, who had just reached their crowdfunding target to develop an interactive murder mystery game. The game would be partly location-based, and they were looking to work with an academic who could help to finesse the user experience and game mechanics to achieve their vision for the project.

I’ve always been a massive fan of murder mysteries as a genre of fiction. And after looking at their Crowdfunder and learning more about Gideon Reeling’s vision, history and ventures as a company (they were once sister company to the immersive theatre pioneers Punchdrunk and have worked with huge names across different industries), I was sold.

Since then, my actual contribution to the development of Interrobang?! has morphed into something much more hybrid and more deeply invested. And I’ve loved every minute of it.

One of my main roles has been helping to shape the game’s narrative design.

In the initial pilot version of Interrobang?! that I tested, there was no website hosting the database of evidence you explore as a player. The whole mystery was divulged via documents, emails and QR codes contained within them, which led to videos.

I was blown away by the detail and intricacy of the story, as well as the acting and humour throughout. I was engrossed with the challenge of identifying the important details in the case and very satisfied when I’d correctly solved puzzles or noticed crucial bits of information.

But there was so much content that I had to play it over two days, taking over 10 hours in total! Part of that was down to me being the kind of player that wanted to note down every detail that might be important. But many of the videos were also very long.

It also wasn’t the smoothest experience moving between all the different pieces of evidence, via the individual documents and emails.

So together with the artistic directors and web developer at Gideon Reeling, we worked to make navigating the game content more intuitive, identify any plot holes and decide what could be cut down (e.g. times when evidence was corroborated by more than one character) to make the experience more streamlined.

One of the most impactful suggestions that I and other testers had was to host the game on an integrated website framed as a police database, which would allow players to view and move between the different pieces of information more smoothly.

I also thought it would be effective to incorporate the player’s note-taking and information-gathering process into this website, through something like an interactive evidence board.

Both of these ambitions have come to fruition. The evidence documents and videos (now much shorter edits) are all accessed via the police database website, which has an interactive evidence board that updates depending on which information you’ve uncovered. It’s a much tighter, more user-friendly experience that envelops you in the Interrobang?! universe.

My other main role in working with Gideon Reeling has been to lead the development of the location-based element of Interrobang?!.

In the pilot version of the game, the only way the player’s physical location mattered was in the suggestion that players go to (or imagine they were in) certain kinds of places to watch the videos that loaded when the QR codes were scanned. The characters would say things like ‘go to the local church’ or ‘find somewhere quiet’, with the idea that the game could be played anywhere.

But we found that players unanimously preferred to be accessing evidence sitting at a desk, preferably in front of a computer, where they could easily take notes, watch/read things multiple times and not use lots of mobile data loading content on their devices. The story also stood so well by itself that being in certain kinds of places made little difference to how it was received.

Through my prior experience in location-based game design, I knew that this component of the game would need to be something much more bespoke; making the most of the specific affordances of engaging with material outside and in physical places.

This led to the creation of brand-new, tailored content that expands the Interrobang?! universe through the use of location-based audio. QR codes positioned around Brentford (home of Gideon Reeling and local arts centre partner Watermans) play a series of voice notes when scanned. These follow the story of one very important character and how they became entangled in the wider mystery and peril of Interrobang?!.

I would love to say more, but I can’t give too much away!

I’m proud to say that I came up with the concept behind this new design of Interrobang?! Local and also wrote the scripts for all of the voice notes, which I then edited together with Gideon Reeling.

Thankfully, Gideon were on-hand in Brentford to do the location scouting, place the QR codes and make the necessary local contacts to turn our vision into a reality.

So, again, when can you take part in these dual online and location-based experiences?

Furthermore, we’re planning to bring the location-based experience to places other than Brentford, partnering with local theatres and arts companies across the country to bring a slice of Gideon Reeling’s immersive magic to different audiences. The script is deliberately designed to be adapted to other places and it’ll be fascinating to see how to story connects to a completely different set of sites.

I’m really excited to hear what people make of both the online and location-based aspects of the game. Do get in touch with me if you want to know more about the project or have any feedback that you want to share.

How to take part

Visit the Interrobang?! booking page on the Watermans website to book your ticket to play the game online. Tickets cost £15 and the game takes approximately 2-4 hours to complete. It is suitable for anyone aged 12 or over (contains moderate bad language).

You’ll be asked to provide an email address for each player.

Register to play by following the email link. Log in and begin.

You’ll need a laptop or desktop for the best viewing experience and a trackpad, mouse or direction keys to make choices through the game.

To take part in the Interrobang?! location-based audio experience, look out for copies of The Echo newspaper at Watermans and other locations in the Brentford area. You’ll find everything you need in The Echo.