I am now getting towards the end of my first term on the Cities and Cultures masters course at Queen Mary. I’ve finished all three pieces of coursework due in this term, which is a great relief, although now I have to think about planning for two large hand-ins in January after the winter break. Lurking in the background amidst all this is the d word (that’s ‘dissertation’), which I have to be considering even at this early stage. Before I talk more about what the next steps are, though, I’ll say a bit about what I’ve been doing during the course so far.
My course is made up of 4 modules alongside the dissertation.  These are:

- Geographical Thought and Practice, a compulsory module running across the first two terms that gives a grounding in geographical theory, writing and research methods.
- Cities, Space and Power, which runs only for the current term, with the final coursework deadline in January. This module focuses on the public spaces of cities, and started off by thinking about what ‘public space’ and ‘public’ mean, and how modern Western understandings of public space arose in the 17th century. We then looked at how public space could be understood from a non-Western perspective, using the post-colonial city of Calcutta and how it is represented in film and other art. In this last section of the module, the focus shifts to contemporary cities, and issues that arise from different uses and regulations of public spaces.
- Cultural Geography in Practice, another module only running this term with the final coursework hand-in in January. So far, we have looked at how geographers have used creative practices as a form of research and dissemination in cultural geography, particularly through collaborations with institutions such as museums and art galleries. In this second half of the term, the focus is more on the concept of ‘home’, including how this is affected by migration, and how creative projects have tried to communicate geographical ideas about the complexity of home as a space of belonging, shelter and rootedness, but also potentially detachment, loneliness and violence.
- Art, Performance and the City, a module that will be running next term. This will look at the relationship between art and the city through urban cultural practices (e.g. urban exploring and walking) and projects by artists in London.

The material for these modules is organised around a series of 2-hour seminars, that I have once a week for each module. This currently means that I only to go into university twice a week, which is incredibly useful and money-saving given that I’m living at home and commuting into London. For each of these seminars we have reading to do in advance, so that we can have an engaged discussion on the material during the 2-hour slots. Apart from coursework, this is my main consistent source of workload. This is typically what I’ll be doing at the library in Canterbury during the week when I don’t have seminars.
The seminar format itself is fantastic. At Cambridge, the Geography undergraduate course is based solely on lectures and small follow-up supervisions, which meant that there was limited opportunity to discuss issues amongst a wider group of people, and between students ourselves. In this masters course, not only is there ample opportunity to talk about our own perspectives on particular topics on the reading, but because the students taking the modules are so diverse (with some modules including people from theatre/performance studies, exchange students and those with backgrounds in a variety of subjects), the seminars are incredibly thought-provoking. I love being able to hear from such a wide range of positions.
As well as seminars, field trips have also been an important part of our modules. For Cities, Space and Power, we had a 2-hour guided walk of Edwardian London, in which we navigated today’s streets while looking at printouts of maps from the Edwardian period. This was a clever and interesting way of looking at some of the changes in public space during this historical period (such as the growth of green ‘squares’ in London), which we could see traces of both in the physical environment and on the maps. We could also see how public space had changed since the 1700s to create what we know as London today.
In Cultural Geography in Practice, we visited the Geffrye Museum of the Home in Hoxton. This museum uses display rooms to show how the interiors of homes have changed since the 1600s, and hosts other exhibitions and events that look at the concept of ‘home’ – as much more than just a ‘house’, but a place with emotional and symbolic importance. We’re fortunate enough to be taught by Professor Alison Blunt for this part of the module, who has worked closely with the Geffrye Museum and whose work on home has been path-breaking within geography.


﻿
And finally for Geographical Thought and Practice, we visited and learnt about the Jewish cemetery on the Queen Mary campus. This is an extremely interesting site that says a lot about the migrant community of the East End of London, and the university’s relationship with it.
As I said before, I’ve had three pieces of assessed work so far, one for each of my modules this term. The first was a 1000-word definition of public space for Cities, Space and Power, which you can read more about here.

For Cultural Geography in Practice, we had a 2000-word essay about the values and challenges of creative public geography work (such as exhibitions, collaborations, etc.)

﻿
And finally for Geographical Thought and Practice, our 2500-word task was to write summaries of two of the ideas/approaches we’d looked at so far, and then write about how these can be applied to our own research interests.
As you can see, it’s been a busy but very enjoyable first term so far. It’s going to stay this way in the months ahead, starting with a 4000-word essay and a 3500-word exhibition proposal to submit after the winter break! As I mentioned before, the dissertation will also start to gradually tighten its grip on my life. This is a 15,000-word piece based on research I’ll be doing from about May onwards, which counts for a third of my overall mark. It’s very important. At this stage I’m still very torn between two ideas for what I’ll be researching, but I’ll definitely be talking more on the blog in the coming months about what I eventually decide to do.
What I can say for certain is that I really, really love this course. It couldn’t really be better matched to what I’m interested in. I’m also very impressed with both the Geography Department and the institution as a whole at Queen Mary, and I feel lucky to have met so many kind, interesting, diverse, and down-to-earth people since starting my masters here.
Posted by Jack Lowe at 19:44 No comments: 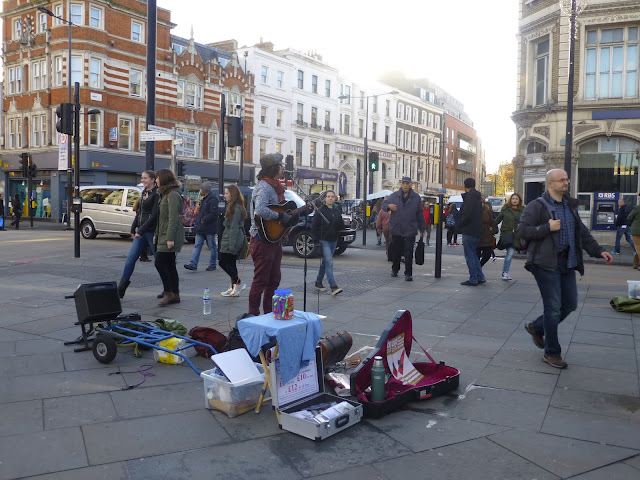