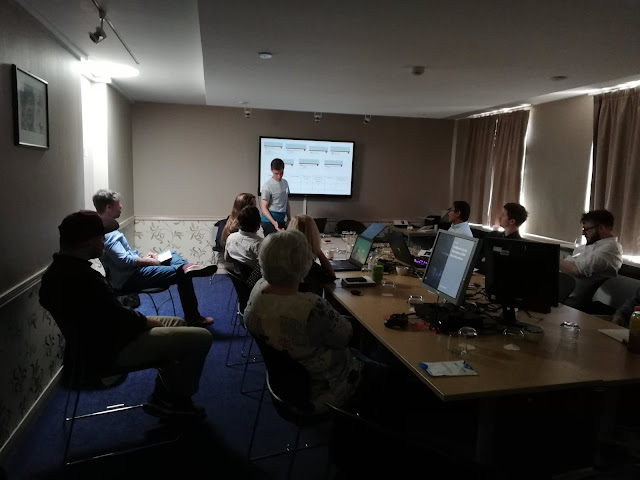 Earlier this month at the Digital Geographies Research Group Annual Symposium, whose theme this year was ‘Geographies of Gaming and VR’, I ran a workshop introducing those attending the event to the group of video games known as ‘walking simulators’. This was an opportunity for the academics to try a type of game that they were less likely to be familiar with, making use of six PCs/consoles in the room with the games Dear Esther, Gone Home, The Stanley Parable, Everybody’s Gone to the Rapture, Firewatch and What Remains of Edith Finch installed. The workshop then prompted participants to think about what significance walking simulators might have when we think about the geographies of video games and digital media more broadly.
Overall, I was pleased with how those who attended engaged with the material I’d provided. It was my first experience running a workshop of this kind, and I’m now more conscious of the kinds of considerations I’d need to make when running a similar event in the future.
As expected for any workshop involving computer equipment, there were some technical hitches involving the hardware provided by the university hosting the symposium. In particular, I became aware just how important functioning sound equipment is for the experience of playing walking sims – e.g. listening to voice acting for communicating character, ambient sound for its atmospheric, transportative qualities, and music for emotion / mood / thematic cues. Earphones were provided by the university (admittedly not high-quality) but on a couple of the machines we were unable to get the sound to work properly at all.
Technical issues aside, however, I was happy with how the workshop gave participants an understanding of what these games are, how they are different from the AAA titles we so often see advertised and discussed publicly, what their evolution has meant for the video games medium, and why they offer some interesting vantage points for geographers thinking about games using geographical concepts, including (sense of) place, landscape, interfaces, post-phenomenology, and more.
Below is my presentation material. It starts with an 8-minute clip from a play-through of the game Everybody’s Gone to the Rapture, alongside the text and slides from my introduction to the workshop. This is followed by links to a list of popular walking simulator games and brief reading list that were provided as handouts on the day.
------------------------------------------


Walking simulators could be described as video games in which the gameplay is based on purposefully exploring the environments represented onscreen to experience their affective power, rather than their landscapes being backdrops to the gameplay. Often avoiding many mechanics typically associated with the video game medium, such as those involving skill in button-pushing, win and loss conditions, combat systems and player death, walking simulator games invite players to explore rich virtual environments as an end in itself – to be immersed into the affectively and emotionally impactful scenarios that are present in their worlds. 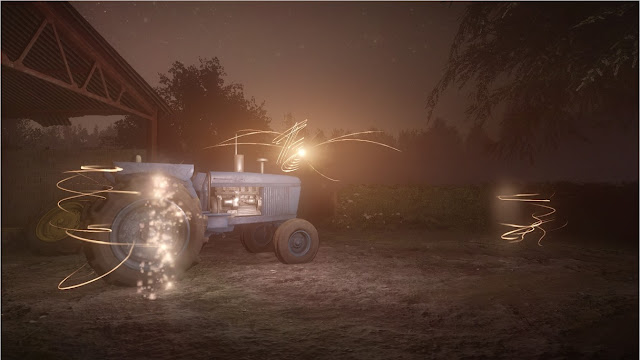 One of the immediate questions you might have, though, is ‘why are they called walking simulators’? Well, the term has actually been quite a controversial one. It began in online video gaming communities as a derogatory term, signalling that these types of games offered limited possibilities for player interaction, compared to games with complex mechanics that might require skill, dexterity or effort to master. The only mechanical input from the player seemed to involve moving between different points of interest in the environment and exploring what’s there, rather than having any observable agency in shaping the game world. Because of this, some have questioned whether walking sims can even really be considered ‘games’ at all. 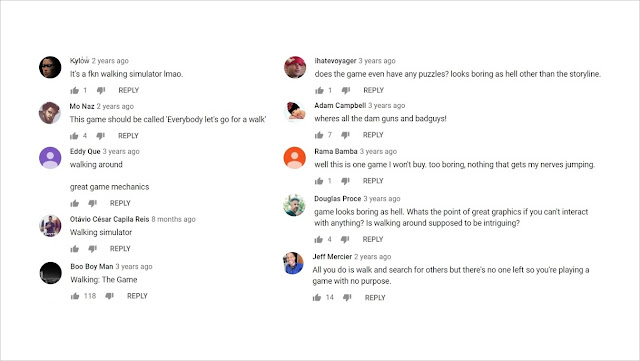 Despite its negative connotations, however, the ‘walking simulator’ term has largely been reclaimed by those who make, support and enjoy these kinds of games. On Steam, the leading platform for PC gaming, you can browse games tagged as ‘walking simulators’ alongside those tagged as ‘action’, ‘adventure’, ‘horror’ and so on. As they’ve become easier to find, buy, discuss and share, whole communities of people have been built around games in the walking simulator ‘genre’. Even for those who dislike the label, use of the term has become so pervasive that it’s become almost universal in the games community. 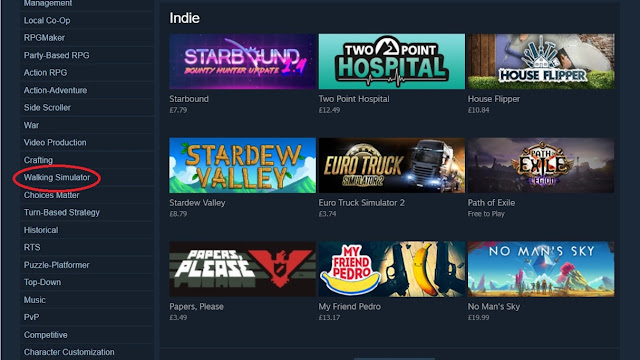 Indeed, some would actually argue that the ‘walking simulator’ term is an appropriate one for understanding the kinds of experiences these games enable players to have. Games scholar Rosa Carbó-Mascarell, for example, has argued that walking simulators represent a digitisation of earlier Romantic and psychogeographical traditions of exploration, in which walking is said to induce a mindful connection with the spirit or sense of a place. 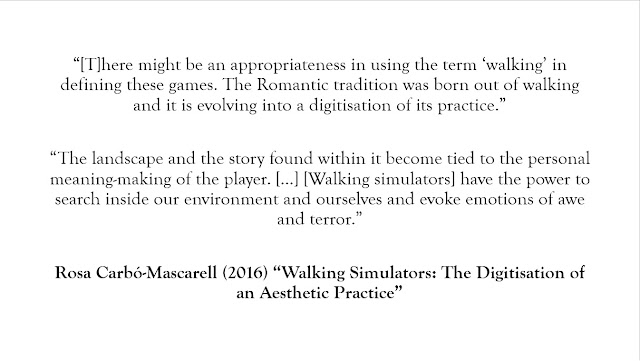 In drawing together the series of events you encounter as you slowly navigate through the world, the gameplay of walking simulators would also appear to enact well-established conceptions of walking as a narrativizing practice that draws situated events into sequences. 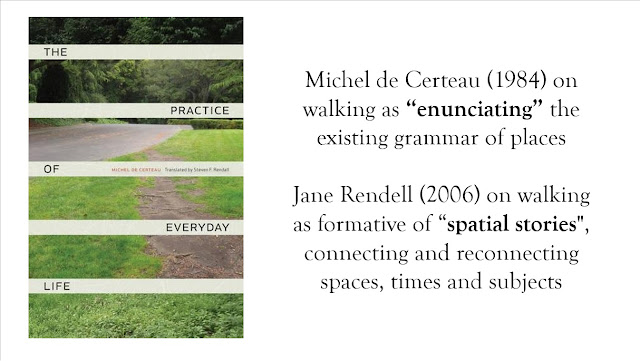 It’s important to remember, though, that in nearly all cases these games involve more than just walking, particularly when you consider how players encounter information in the game world. In a paper published online earlier this year, Melissa Kagen describes the mechanic of ‘archival adventuring’ that’s used in many walking simulators, in which players piece together a version of events by navigating between carefully arranged materials in the game world, and forming their own interpretations of them. An archival perspective recognises how the player’s experience will necessarily be conditioned by how the information is organised by the game’s developers, the gaps that are intentionally left by designers for players to fill, and the game’s user interface, and not just how the player ‘walks’. 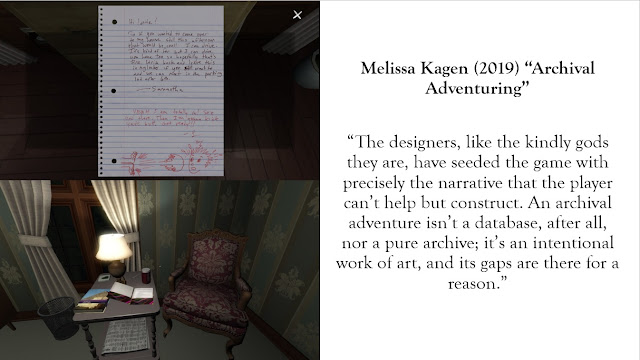 Before I finish, I want to briefly address the influence these games have had in both the games industry and wider sector of interactive digital media. What’s especially interesting is that the vast majority of these games have been made by indie games developers. Without the same costs as most AAA games in terms of animation, voice acting, and complex UI systems, it turns out that the types of game that often fall under the ‘walking simulator’ label can be relatively inexpensive to create. However, they’re still able to reach a wide audience through popular platforms such as the Steam store that sell content made by a broad range of developers. 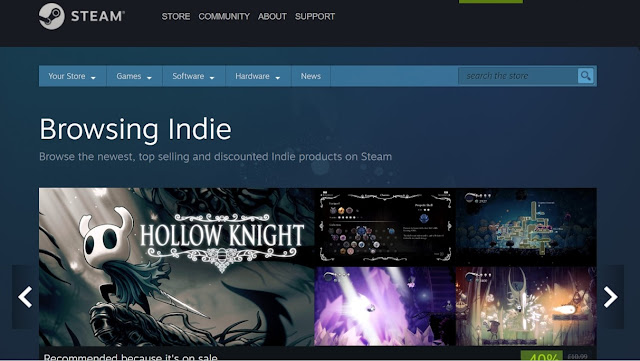 Yet despite the limitations their developers have to work with, games tagged as walking simulators have been winning some of the biggest prizes in gaming. The wider industry has been forced to take note. Particularly for AAA titles that aspire to tell some kind of story, the bar’s been raised, as walking simulators have showed it’s possible to tell stories in a highly emotionally engaging way without resorting to cutscenes or series of objectives, which distance the player from the actual storytelling process. 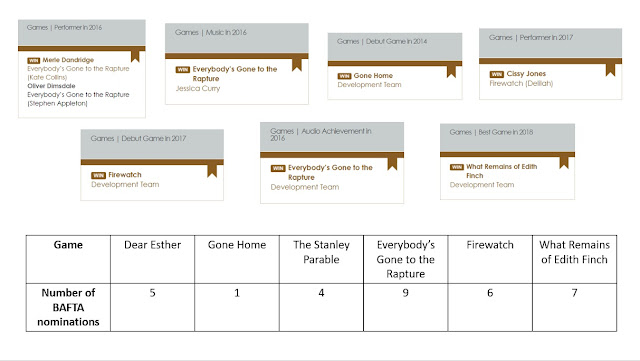 As a result, in recent years relationships between mechanics and narrative have been at the forefront of game design thinking and discussion, and this has led to some highly innovative examples of interactive storytelling that work with the affordances of digital technology in newly compelling and meaningful ways. 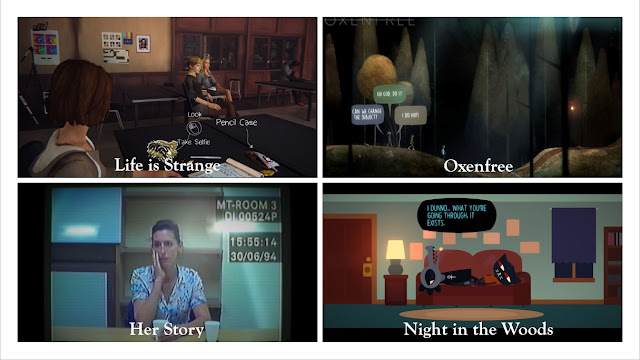