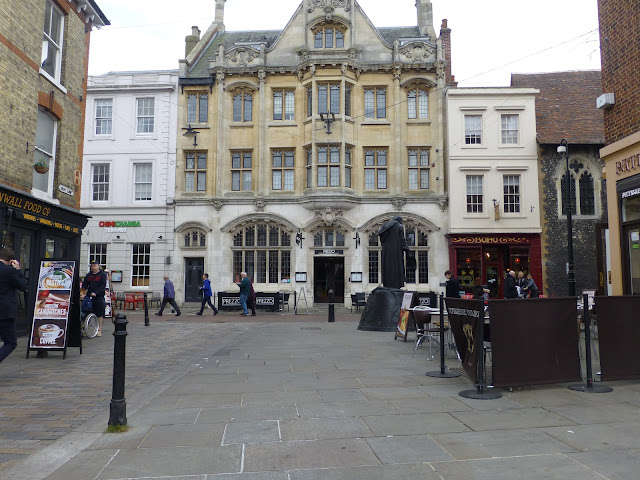 It has become part of my everyday routine in the last two years to eat my lunch while sitting on a singular bench that overlooks the corner of Best Lane and the High Street in Canterbury. As well as being located conveniently close to the public library, it turns out that this bench offers a narrow vantage point for peering out onto the high street; a snapshot of different characters acting out their days before disappearing behind buildings to the left and right, like performers exiting a stage.
On my way to the library one morning last October, I was surprised to see, outside Patisserie Valerie, a large figure covered in cloth, taped off from the gathering pedestrians. A short distance down the road in the Three Cities Garden, the usually quiet patch of grass buzzed with an audience of suits, dresses and heels, listening intently to a speaker I couldn’t see. Some detective work on the internet revealed that I’d stumbled upon the unveiling of a bronze statue of Geoffrey Chaucer, author of Canterbury’s most famous literary output, The Canterbury Tales. The statue saw his figure raised high above passersby on the high street, like a preacher in a pulpit, on a plinth also cast in bronze. 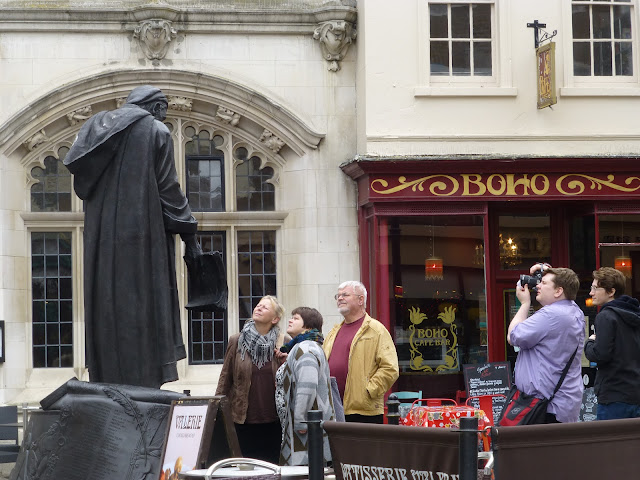 My view from the bench had been doctored; a permanent scene change. Watching how visitors react to the statue is a study in the social life of everyday spaces. What had previously been a blank space of paving stones, whose only function was to be stepped on and splattered with gum, had suddenly become a spectacle: a landmark to be photographed, a surface to touch and interpret. Where people once walked and stared straight ahead, only diverting to avoid the flows of oncoming traffic, people now turned their heads to gaze at the intruder on his platform; the speaker who speaks no words. The words come from the voices surrounding him.
Since his introduction, Chaucer’s statue has already undergone some transformations. On the first day of spring he was decorated with a flower on his ear, another time with a traffic cone for a hat. Chaucer just stands there, voiceless, but for the expressions of the diverse personalities gazing up at him. The tales of Canterbury are being re-written from below, in the acts of ordinary people.


__
Even the most mundane spaces can become meaningful through action. The evidence is all around us, if you discover how to find it.
For me, this happened on Best Lane two years ago, at eye-level on an unremarkable drainpipe. 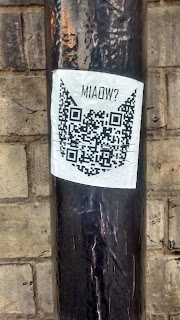 The meaning here was not only in the eye-catching image, but how this rectangle of space now led to an alternate virtual reality. The drainpipe was a magician’s sleeve, disguising a portal to another dimension as slight as a playing card.
Other interventions here can transport you in a different sense, perhaps to a corner of the brain occupied by your giggling 5-year-old self. 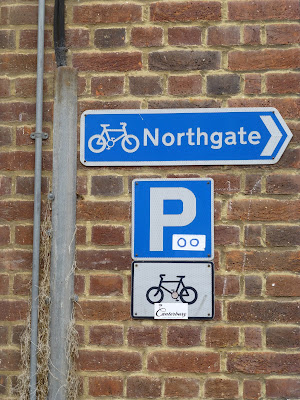 Everywhere time and space is warped and stuck like gum on the pavement, pockmarking the outer surfaces of our lives with parallel worlds and their abnormal rules. In the Three Cities Garden I have found the most unexpected creations, lurking in what were nondescript spaces and times in my life; throwaway situations recycled and built anew. 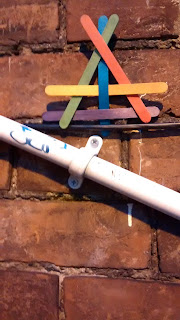 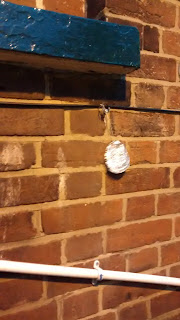 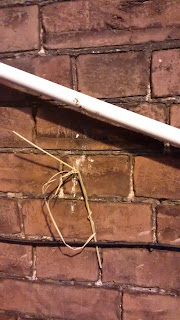 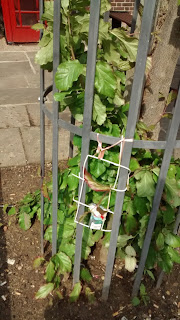 The inventions never hang around for very long – these were gone within days. I can only assume that an active citizen or street cleaner of some kind saw fit either to steal them or throw them away. After all, the line between art and rubbish can be difficult to distinguish when you are using materials that have exceeded a given purpose. But looking at their appearance was enough to know that these objects were man-made achievements; that materials with natural properties had been bent and moulded to achieve some human aim or aesthetic.
Meaning, like a sticker on a drainpipe or gum on the pavement, is attachable and detachable; though it is much easier to attach than detach. For it always leaves some trace of its presence in a physical mark or residue, a record or memory, waiting to be rediscovered by fresh eyes and reshaped by the hands of time.


__
This corner is home to more than just human inhabitants. From the rooftop and awning of the West Cornwall Pasty Shop, a gang of about 10 pigeons survey proceedings, swooping down when they spot pasty crumbs and unsuspecting sandwich-eaters. In fact, given that they eat, sleep and hunt there, the pigeons probably have a greater claim to calling the space ‘home’ than humans do. 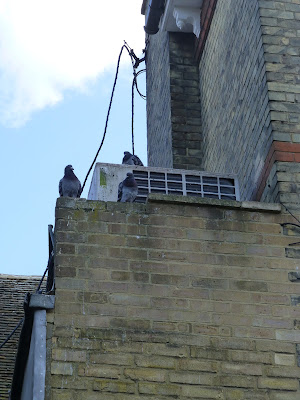 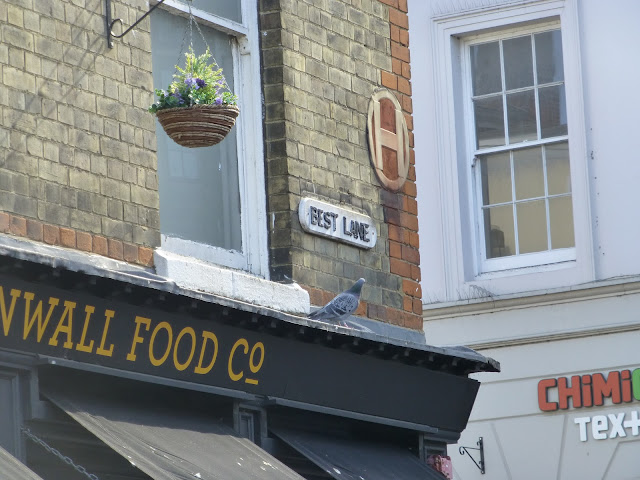 You wouldn’t notice how much they influence the area’s activity until you have sat and watched them at work. They become instant prey for staggering toddlers who chase them from the ground; the subject of laughter from tourists and teenagers who look down in amusement as the birds waddle frantically out of their path. I’ve honestly started to admire the lengths these birds will go in pursuit of food, flying straight into oncoming human traffic which, when you’re a bird, must be like a human walking in front of a herd of galloping giraffes.
Occasionally they gather round me during my lunchtimes, edging as close to the crumbs at my feet as they’ll dare, the slightest movement sending them spiralling away in panic. If this is their home, the pigeons are insurgents, risking everything by demanding a place to live in a citadel of concrete, bricks and mortar. We might see them as vermin; the breeding masses of an urban underclass. Yet ironically it is they who look down upon us. The streets may be ours to borrow – to pass through or stop awhile – but they rule the rooftops.
__ 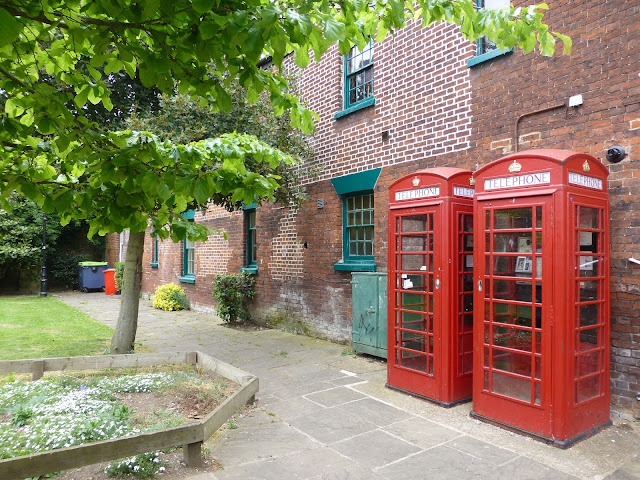 The Three Cities Garden was given its name in 2010, to celebrate Canterbury being twinned with Bloomington (USA) and Vladimir (Russia) for 25 years. Appropriately, this unassuming spot is also an attraction for international tourists, who sporadically flock to take photographs beside the red telephone boxes that are located inside.
Even as a local I can appreciate the symbolism. On rainy days, as I sit on a wet wooden bench, eating a packed lunch under an umbrella beside the red phone boxes, I feel unusually in tune with my English heritage, as if I’m sending a postcard to myself. I feel at home but in an abstract way: it is home through the lens of cultural icons that are recognised and cherished way beyond the bounds of my little life.
For some, this garden really is their home in a pragmatic sense. Located in the heart of town, close to public toilets, the public library and other local amenities, the spot is a favoured place of leisure for the homeless or those otherwise unoccupied. Usually once a week or so, a group turns up with a Bluetooth speaker and occasionally a tennis ball, and the garden unfolds like a toy box into music, cans of lager, raucous laughter and play; a kind of outdoor living-room party.
To others in this community, it is more like place of refuge; somewhere to seek the quiet company of a stranger who could maybe lend a listening ear or a cigarette. The person that comes to mind is Bernadette, a homeless lady who told me how she missed her sons who live away from Canterbury. I asked her if she could see them; if they could help her. For someone who has so little, her response was strikingly selfless: she didn’t want to trouble them.
This place to all, it seems, is somehow more than itself; multiple cities folded into a space no larger than an average back yard. It is home, but at the same time it is elsewhere, above, beyond and outside. It is both your relationships to others – however close, however far – and it is the lofty heights of wherever your own thoughts lead you.


__
Regularly immersing yourself in a space can be an effective way to make sense of the cacophony of rhythms that make places as complex as they are. It allows you to find patterns in the noise; witness actions carving into everyday reality like a caveman’s etchings, revealing a past, proclaiming a future, and letting them bleed into the present.
Apart from a small plaque and some concealed gravestones hidden in the corner of the Three Cities Garden, there’s little to show that this whole corner of Canterbury – up to the edge of the garden and extending down the high street almost to the bridge over the River Stour – used to be occupied by All Saints Church. A church had stood on the site since medieval times, being uprooted and upgraded successively and most recently in 1878, before it was demolished in 1937. The garden itself used to be the churchyard. 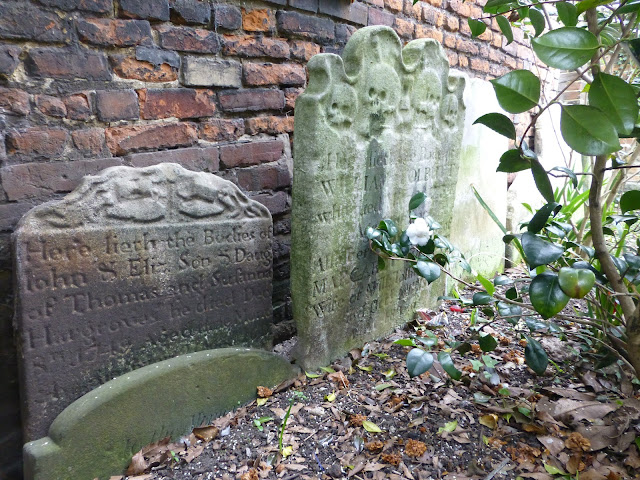 Yet even long after its demolition, the rhythms of church life are recalled like echoes from an unseen choir – in the music of homeless citizens gathered together, and the solemn, contemplative lunchtimes of those breaking from the demanding patterns of work and responsibility. Many will be familiar with the presence of ‘Canterbury Healing on the Streets’, who set up deck chairs in the space in front of Patisserie Valerie every Saturday. The church building may be physically absent, but its presence lives on in the mindful, reflective acts of pilgrims who seek out this corner of the city and its vibrant habitat.
‘Healing’ may be the wrong word, but my lunchtimes have revealed to me how taking the time to be aware of your surroundings – mindful of the chorus of relationships channelling into a place – teaches you more about yourself, but not in an introspective or narcissistic manner. It gives an ‘outrospective’ view of the self: being receptive to the environment and your place within it; appreciating what is larger than you alone, but also the part you play as an individual in the symphony of everyday life.
It is a religious experience.
And so the corner of Best Lane and the High Street is as significant as any other place you could think of, which is to say that it is part of a conspiracy far more widespread than you can ever know. Yet still you cannot help but participate in the illusion. For everywhere there are cathedrals sprouting from cracks in the pavement, seeding and flowering like eternal spring in the gardens of the mind.